Tradeswomen organizers like to focus on our success stories. We want to show that women can do it and we want to encourage young women to get into the trades. But we often wonder to each other whether we send women into the hostile environment of construction with too little information about what it’s really like out there. We know that until women reach a critical mass in the industry we still face widespread harassment and discrimination on the job. One of the ways we’ve experienced discrimination is lack of training. Women have been complaining for decades about reaching the end of their apprenticeships and still not having the requisite skills to “turn out” as journeymen in their trades.

This is the story of one woman who tried every way she knew how to make it in construction and never received the on-the-job training she needed to become a top-notch journey level electrician.  Carol Toliver completed the apprenticeship in IBEW Local 595 and worked as a journeyman for years, but she never felt she acquired the skills she needed to become the skilled craftswoman she aspired to be.

Carol grew up in a small town on the Hudson River in Westchester County, NY. She says she got an excellent education there and went on to college at Fisk University, a historically black college in Nashville, TN. At Fisk she participated in a student exchange program in 1978 that took her to Mills College in Oakland for a year. She met her future husband on her way to a rare book exhibit. She loved Oakland weather so much that she returned there for good after completing her last semester at Fisk.

She started working at banks and offices but two different companies she worked for moved out of town and so she ended up in a displaced workers program. That’s how she found out about the electrical apprenticeship. As part of the pre-apprenticeship program, students signed up for an apprenticeship.  She chose electrical, took the entrance exam, and forgot all about it.

Carol was working as a teacher’s aide and planning to go into education when her husband suffered a career-ending injury at his work as a butcher. He fell on a slippery floor while carrying a pallet of chickens from the freezer.

Within days of his accident she learned she had passed the test necessary to get a teaching credential and also had been admitted into the electrical apprenticeship. She realized she had to become the family’s main breadwinner to support her disabled husband and two children.  So she put her plans of going to school on the back burner and opted to accept the apprenticeship, with on-the-job-training and immediate income.

Carol was excited to be an electrician. Her apprenticeship class started on-the-job training even before school classes began. It was 1997.

When she got on the job she was surprised to find an atmosphere of chaos. It seemed like everyone was yelling all the time. She came from a teaching environment where, she says, there is a lot of support and repetition to help you on your journey.  In construction, she quickly learned, it was “jump in and make it happen.”

She was alone. “A lot of electricians have family members in the trade. I knew no one. It was a whole different world.I was a young Black woman, venturing into an environment that was predominately white men who, it seemed, all had some kind of connections,” she said.

The electrical apprenticeship is five years and consists of 8000 hours of classroom training and on-the-job training. There were two other women in Carol’s class of 25. “One dropped out and the other wouldn’t associate with me. I never knew why,” she said.

On the job Carol was often relegated to getting materials the first two years of her apprenticeship. She quickly recognized she wasn’t getting the same training as the men in her class. That’s when she started looking for help.

“I talked to everyone I thought could help–coworkers, apprenticeship directors, union officers,” she said. During her training she met with three different apprenticeship coordinators, trying to get help with her education. They each made her feel like it was her fault.

“My first program coordinator sat down in front of me with his pen and paper, crossed his legs and said, ‘Well young lady what seems to be YOUR problem?’ And I pulled out my piece of paper and pen and said, ‘this is my problem. I’m not getting the skills I need. I want to be a good journeyman. That’s my whole point of being here.’

“He said, ‘Well I don’t see what the problem is. You just have to apply yourself.’

“So I thought, ok I just have to try harder and I continued to ask people for help. I learned in the construction industry there’s a certain mindset that I didn’t have. Everybody just kept making the assumption that I wasn’t present and committed. I was. Maybe I needed a little more hands-on attention. But I think that was fair because most of the guys had worked on mechanical stuff. I had none of that experience as a female. 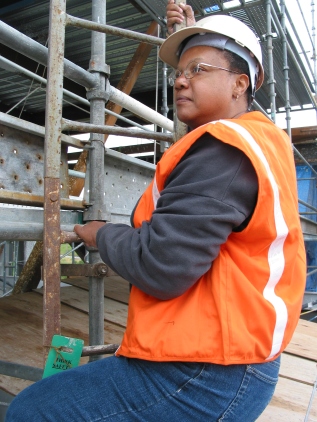 “When I talked to my second program coordinator I was very emotional. I was so distraught. I wanted to be a success. I wasn’t getting the training. I didn’t know who else to reach out to. Maybe he didn’t know what to do with me or how to handle it. After I expressed my concerns he just said, ‘You’re in the apprenticeship, you’re on a job aren’t you?’ He literally threw me out of his office. I was just devastated. I just said to myself I’m gonna keep trying.

“Then a new program coordinator appeared to be much more progressive. When I spoke to him his response was not as vocal but was essentially the same. He came on the job and talked to the foreman who put me with another journeyman. All we were doing was lifting heavy boards. So then I just realized that the help I thought was there for me was not there.”

Carol said her whole career was one of fear and frustration—fear of being laid off and not being able to support her family, and frustration that she was not learning the trade.

By the third year of the apprenticeship she had reached the “point of no return.” Her husband advised her to quit. “I was too stubborn and had put in too much time to consider that,” she said.

One journeyman she worked with, Marta Schultz, told her about Tradeswomen Inc., a non-profit dedicated to bringing women into the building trades. Marta, besides being an electrician, is a composer, playwright and singer. She wrote “595 The Musical” and skits about women in construction. Her theater group, the Sparkettes, performed at tradeswomen conferences.

“Marta is an experienced union hand and a feminist committed to supporting women in the electrical trade. She made sure that I learned under her watch, unlike many of my union brothers and foremen,” said Carol.

Life on the job didn’t get any easier after Marta, Carol and four other female electricians sued a contractor for discrimination and won. 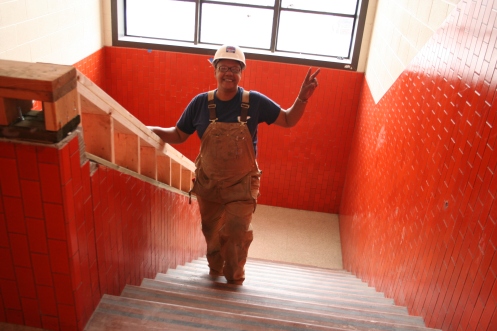 Carol says the women of Tradeswomen helped her keep her sanity though tough times. She served on the Tradeswomen Inc. board of directors for many years, a place where her positive outlook and organizing skills were welcome.

During that time her kids were leaving home and her marriage foundered, not least because of changed roles and old expectations. “I did a lot of crying, a lot of self-medicating,” she said.

But she decided she had to stick it out, with the ongoing expectation that things would get better. They never did. When Carol turned out of the apprenticeship in 2002 she still did not think of herself as a capable journeyman. “My skills never got a chance to launch,” she said.

Fear of being laid off held her back. “The first couple of times when I told my foreman that I wanted to do different things (related to my craft) that week or the next week, I would find myself laid off.  I was terrified of being laid off and missing a paycheck. We had all this debt. I didn’t see anyone willing to help me and I got to the point where I stopped asking.

“Some of the contractors would give me a basic task I could handle which I appreciated, but I wasn’t moving forward in my experience.  Instead of saying ‘Let her try it,’ they would eventually lay me off.  Even when I was on a job where I became good at something, I would be put on another job and it was back to square one. Then they would send me on to the next contractor who would try to keep me on by giving me menial or not electrical-related tasks.”

After 17 years of working as an electrician, Carol made the decision to quit the trade and move on with her life. I saw her soon after and she was smiling. She finally felt free from the burden of fear and frustration. For a time she worked at computer repair and later she returned to a job in banking. She recently moved into a new senior housing complex in the East Bay.

Asked what she would tell women who find they are being denied training, Carol retained her natural optimism. “I would tell them to not be afraid to ask for help and keep asking until you get it.  You can do it, you just have to stand your ground and not let them get away with not training you.  Work hard, and remember your reason for being there.  Look for allies on the job.  There are some good brothers out there and women too. Seek them out early and often in your career. Be determined to succeed and you will.”

*Apprenticeship Completion and Cancellation in the Building Trades, The Aspen Institute, 2013

8 thoughts on “Carol Toliver: “My skills never got a chance to launch””