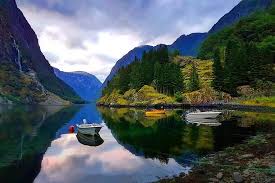 We think of you as we sit on our porch sipping aquavit and eating gjetost cheese on rye crisps looking out at the fjord in our cozy cabin for six in the village of Flam, Norway. To our backs are steep forested mountains and waterfalls. To our west is the North Sea.

Just kidding. That’s where we were supposed to be at midsummer with Scandinavian American cousins. We had made all our reservations and even bought plane tickets when the corona virus hit. Still waiting for refunds.

We had planned to visit the ancestral homes of our Scandinavian ancestors. I wanted to be there at midsommer, a celebratory holiday which marks the summer solstice. Instead we sit in our zero gravity chairs in our Santa Rosa backyard watching our flowers and veggies grow. In June I harvested the last of the oranges and then artichokes, the last of them now blooming magnificently. Tomatoes, eggplant and cucumbers are just coming on. It’s not so bad. Life has slowed way down (though it was already pretty slow around here.)

The Norway trip was the idea of my cousin Gail. She lives in Gig Harbor, Washington in a lovely house that has been sort of a retreat center for the family for the last several years. We would gather for reunions and also to go through Gail’s extensive family history archives, saved in cardboard boxes in her attic. Lately my brother Don has been researching the Swedish relatives.

We share a Norwegian grandfather and Swedish grandmother who emigrated at the turn of the 20th century and met and married in South Dakota where their relatives had homesteaded. They soon moved further west to Idaho, Oregon and Washington, settling in Yakima.

Our grandfather, Bernt, or Ben in American, left Norway in 1898, never to return. He was born in 1878 in Borsa, a fishing village on a fjord not far from the town of Trondheim.

So we may never get to Norway but we have used this opportunity to educate ourselves about Norwegian culture, reading literature and history. My mother Flo and I had already made a pilgrimage to our Norwegian and Swedish ancestors’ homes. Thanks to Flo’s 1979 travel diary, I reconnected with a woman who we met at the Oslo feminist center and who let us stay in her apartment when all the inns were full. In letters, Bente has caught me up on 40 years of her life. She is a lesbian feminist and was part of a back-to-the-land movement in Norway when she returned to her family farm in the north. Now she’s working at a historical museum near Oslo.

We also discovered that our next door neighbors had taken a family trip last year back to his ancestral home in Norway and we had planned to meet up and hear all about their trip when coronavirus hit. Perhaps our neighbors are my cousins too!

Still sheltering in place in NoCal, we shall just have to pretend we are up in the north country. I think I have some aquavit around her somewhere. Skol!

(My Danish friend corrected me. Aquavit is not to be sipped. It is downed, ice cold.)