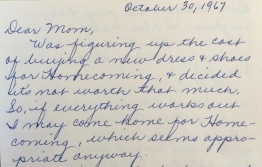 Over the years a horrible sickening black mold has infected the room next to the garage where I’ve stored boxes of my old stuff. In order to access anything from that dark cavernous space I must wear a respirator and gloves. Now that I can use my iPhone to photograph papers and store them in my computer, I’m slowly archiving them. Chucking the mold-infected sheaves into the recycling gives me great pleasure.

I’ve imagined that the mold was introduced from items that had previously been stored in my grandmother’s root cellar/basement in my hometown of Yakima, I guess because the smell is similar. That’s silly, but it started me wondering about molds and how they travel. It might be stachybotrys atra (also known as black mold). Whatever type of mold it is, and there are more than 100,000 kinds, it is nasty and takes little time to activate my asthma if breathed in. Molds require moisture to grow. When we were remodeling this building in the early 21st century I discovered a crack in the foundation that allowed moisture

into the storage room. I patched it, but of course that did not rid the room of mold, and perhaps there is no way to get rid of it. Removing the contents might help.

This week I’ve been pulling out my mother’s papers to aid in reconstructing her life in Yakima and her work as a Red Cross Donut Girl in Europe during WWII. I still have Flo’s cardboard American Red Cross suitcase issued to her in Washington DC and then carried from Italy through France and into Germany during 1944-46. She saw the liberation of Dachau, so I suppose the evil mold could have traveled in the suitcase from Nazi concentration camps. It’s a theory.

When I opened the suitcase I found two scrapbooks that my mother had assembled in the 20s and the 30s, a sheaf of her letters, and a bundle of letters written by me to her in the 1960s, 70s and 80s. These I perused immediately. What a gift, that my mother had saved these letters! In the days when people wrote letters as a primary way of communicating, I wrote my mother often just to tell her what was going on in my life (long distance phone calls were expensive).

The letters span a period from the fall of 1967 when I first left home in Yakima to start college at WSU in Pullman (a 190-mile three-and-a half-hour drive away), up to the summer of 1981 after I’d moved into the house where I’ve lived ever since here in San Francisco. I haven’t yet counted the number of different addresses where I lived in Pullman, Seattle and San Francisco during this time, but it is certainly in the double digits.

The most frequent subjects of the letters were money—borrowing and paying back, the cost of things, not having enough—and job hunting. I’m glad for the mundane everyday minutia, what things cost in 1970,

“The prescription for progesterone that cost $1 to fill in Yakima cost $13 in Seattle. I should have sprung for the $6 bus ticket and bought it there.”

“Thanks for your help. Didn’t include you as a reference. It’s never a good bet to use a relative, especially your mother, no matter who she knows and how well respected.”

I was struck by the close relationship between my mother and her daughter, the “never trust anyone over thirty” feminist revolutionary. No doubt this was the work of my mother’s efforts to maintain a bond, more than mine, but the letters make it clear that I depended on her for a great many things besides loans—support in whatever endeavors I worked at, help with writing, bouncing off opinions about politics and life in general. She was truly my rock and I hope I was hers.

Letters from 1967 through the spring of 1969 when I lived in dormitories (the only option for female undergraduates then) are filled with reports of studying, dating boys, finding rides home, gossip about people from Yakima and complaints about the cost of books and clothes. I’m surprised at how conventional I seemed, but I don’t think this was just a put-on for the benefit of my mother.

After I moved off campus in the fall of 1969, my letters expressed interest in “alternative lifestyles” and “building viable counterculture community institutions.”

I wrote about founding the League for the Promotion of Militant Atheism:

I wrote about politics and social change, racism, feminism, sex and gay liberation. I had embraced the unconventional.

So very many things changed during those explosive years, but some things never did. The last of these letters, dated 8/18/81, starts:

“Here’s some money I promised. Still looking for work.”

3 thoughts on “Writing to Mom about Sex Etc.”