Sisterhood is Powerful. That was my take-home from the 14th Women Building conference. When more than a thousand tradeswomen, supporters, advocates and union brothers convened in Los Angeles May Day weekend, it was by far the largest gathering of female construction workers in the history of our movement. Union tradeswomen of all crafts came together from all over the country and the world to share experiences, strategize, laugh and cry together.

There is nothing like being in a room full of a thousand cheering sisters, and it was a new experience for me, a tradeswoman activist of 40 years. We are a diverse group of women, a rainbow of race, class and ethnicity, all part of the sisterhood. I spoke to many individual women—young members of the California Conservation Corps who drove all the way from Fortuna in Northern California, old timers greeting old friends, students who are working to get jobs in the trades. They all said the best thing about this conference was the camaraderie.

I’ve participated in the Women Building conferences since their beginning in 2002, and many tradeswomen conferences before that. But this conference was qualitatively as well as quantitatively different from past events and I think it portends a new chapter in our Tradeswomen Movement. I think three factors point to a sea change in our movement: first, the sponsorship of the North America’s Building Trades Unions (NABTU); second, the development of mature leadership at local, state and national levels; and third, the advent of social media and its use by the larger community of tradeswomen.

The NABTU sponsorship was the result of work by the National Women’s Committee, especially Patti Devlin, Debra Chaplan, and Caroline Williams. We now have leaders like these on a national level connected to union presidents and internationals as well as the Task Force on Tradeswomen’s Issues, which brings policy expertise to our movement. I was thrilled by the number of women who stood up when asked who had been elected to a leadership position in their unions. And this year the vast majority of women were sent by their unions to the conference.

A new feature this year was the popular tradeswomen action clinic table. Organizers chose two primary issues that we could weigh in on: restoring federal WANTO funding for tradeswomen organizations, and resisting so-called Right-to-Work legislation in the states. The table was organized by elevator constructor LJ Dolin, Kelly Kupcak from Chicago Women in Trades, and Nicole Aro from the AFL-CIO. It was a great idea and organizers plan to expand it next year with more ties to workshops. The number of participants at the tradeswomen history workshop that I gave with historian Brigid O’Farrell showed us that women are interested in our history and in using what we have learned over the years to forge a new strategy for our movement.

When I got home and started friending folks on Facebook I could see that our community already has been successfully organized by Sisters in the Building Trades’ Melina Harris, who gets kudos for bringing so many women into the electronic media fold. I love that we can kvetch and share our stories instantly on groups like Trade Women Chat. It’s a far cry from our days publishing the quarterly Tradeswomen Magazine with writing, typesetting, layout and bulk mailing tasks taken on by volunteers.

What started as a conference for California tradeswomen (sponsored since 2002 by the California State Building and Construction Trades Council) has now become Women Building the Nation. Next year’s conference will take place in Chicago—the first of these outside of California. We’ve got the dates: April 29-May 1, 2016. It’s an opportunity to expand on existing networks of tradeswomen in the Midwest and to make our movement truly national.

Tradeswomen have long been virtually invisible on the front lines of the Feminist and Civil Rights Movements. We still are the ones who daily confront the most aggressive kind of sexism and racism in our traditionally male jobs. For decades now we have been devising strategies to counter isolation and harassment at work and to increase the numbers of women in the trades. The numbers and enthusiasm at this conference give me hope that we can build a better world for women in the trades. I’m looking forward to the 2025 conference: Women Building the Universe.

Sally Ride is a big hero of mine. Her birthday seems an appropriate time to remember her. I wrote this piece from her perspective for an Old Lesbians Organizing for Change (OLOC) event. Each of us took on the persona of a lesbian in history and I chose to be Sally. Researching Sally’s life was difficult as she was such a private person, but there’s a new biography of her that promises to provide more detail. http://io9.com/the-secret-life-of-sally-ride-the-first-american-woman-1586255004

Now that I am dead, you know that I was a lesbian. My partner of 27 years, Tam O’Shaughnessy, helped me write the obit, and my lesbian sister, Bear, made it clear to the press, if there were any doubts. Bear is a Presbyterian minister and gay activist who has gotten arrested at protests, but that’s not who I was. We laughed that I was the most Norwegian in the family, a very private person in a very public job. It served me well.

Why didn’t I come out while I was alive? I didn’t come out as having pancreatic cancer either, which I’d been diagnosed with 17 months before I died. I had to keep my private life separate from my public life. For one thing, in any male-dominated job you have to contend with a certain amount of harassment and misogyny. In NASA, as you can imagine, there was a military man asshole factor. You didn’t want to bring that home. Everyone wants to know why I married that guy in 1982. Protection.

Besides, it wasn’t really about me. I was a symbol for all women. I could not have been the first American woman astronaut to travel into space if I had come out as a lesbian. It was hard enough being a woman in a “man’s” job. If the Soviets hadn’t sent up two women before me, would the U.S. have thought it necessary to have a female too? I think the answer is clear. The men who ran NASA did not regard women as suitable or capable to be astronauts, but the Soviet Union had been running ahead of the U.S. since Sputnik was launched in 1959. We had to win the race with the Soviets. The first Soviet female cosmonaut, Valentina Tereshkova, orbited the earth 48 times in 1963. I went up for the first time in 1983.

I was completing a PhD in physics at Stanford when I answered an ad in the Stanford student newspaper seeking applicants for the space program. I joined NASA in 1978. I served as the ground-based capsule communicator for the second and third space shuttle flights and helped develop the space shuttle’s robot arm. Then I was chosen to be a crewmember on the Space Shuttle Challenger. I was the first woman to use the robot arm in space and the first to use the arm to retrieve a satellite.

During the run-up to the flight, I was the subject of much press attention. Reporters asked me questions like, “Will the flight affect your reproductive organs?” and “Do you weep when things go wrong on the job?” exposing the level of sexism still prevalent in the American culture. I spent 343 hours in space on two missions on the Challenger in 1983 and 1984 and was training for a third when the Challenger disaster occurred. Then I was assigned to investigate that incident, and later the Columbia disaster as well.

Tam was the love of my life, and a fascinating accomplished woman in her own right. We met as kids while we were both aspiring tennis players. She was coached by Billy Jean King and went on to play on the women’s pro circuit in the 1970s. After she retired from tennis she founded the women’s tennis association newsletter and remained its publisher for several years. She became a professor of school psychology and she’s an award winning children’s science writer.

Our partnership was more than just a marriage. We collaborated on six children’s science books. She published six more on her own.

Like me, Tam was a scientist and educator and deeply concerned about the underrepresentation of women in science and technical professions. Along with some like-minded friends, we founded Sally Ride Science with the goal of narrowing the gender gap in science. Tam remains the CEO. We accomplished much but there is still much to do.

On one crew on Potrero Hill all three masons were women.

On another day I found this mason working alone on a job in the Excelsior. 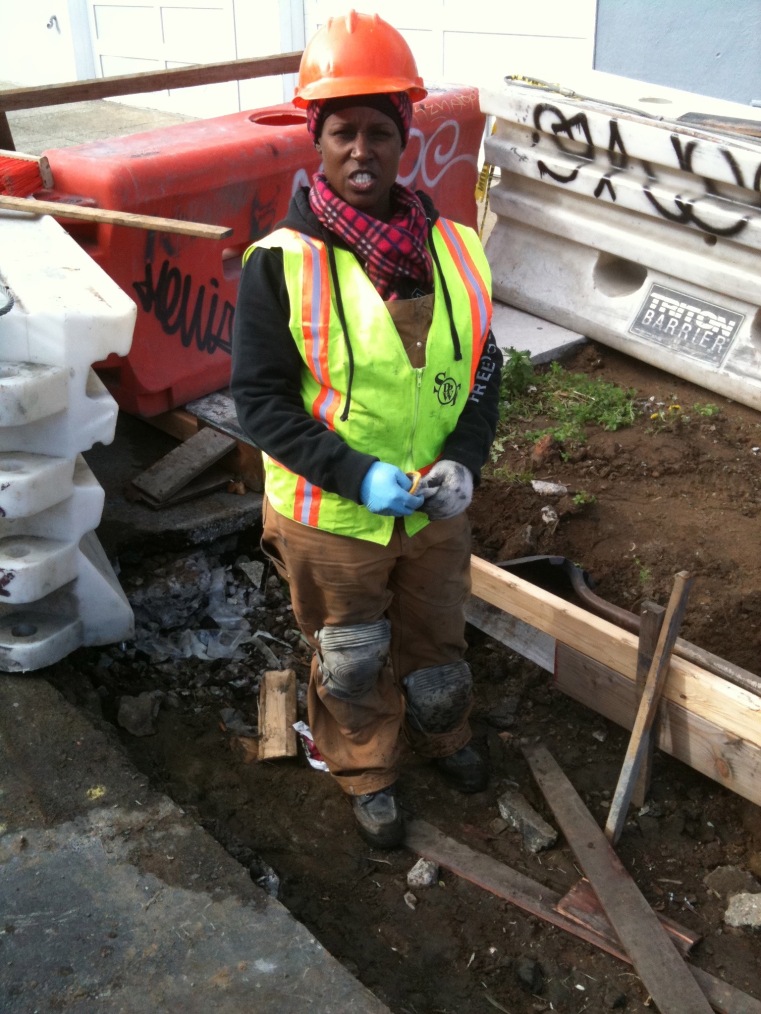