Prescript–Madeline’s obit was published in the New York Times: https://www.nytimes.com/interactive/2018/magazine/the-lives-they-loved-2018/stories/madeline-mixer?mtrref=www.google.com&gwh=DA3173ABC9CA1D356B48F73B38783B2A&gwt=pay 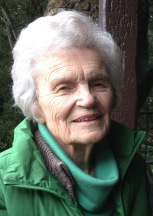 As the director of the Women’s Bureau District IX of the U.S. Department of Labor, and long after her retirement, Madeline was a friend to tradeswomen and women who sought jobs in nontraditional blue-collar work.

Madeline was an avowed feminist and for a time during the Reagan administration she lost her job because of it. Feminism ran in the family. She told me her mother, who lived to be 101, had been a suffragist and organized to get women the vote.

I think Madeline’s life goal was to make it possible for women to have access to jobs that could make them independent of men. Her own life experience as a divorced mother of a young child was the driving force behind her feminism. At the time women didn’t have so many options. 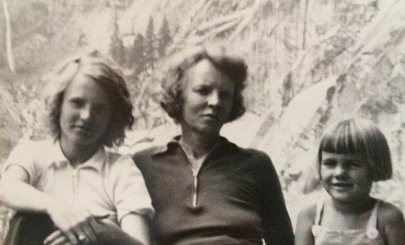 With mom and one of her big sisters

As a UC Berkeley student Madeline was active in student government

I met Madeline in the 1970s soon after I moved to San Francisco. As an activist trying to break barriers to women in the construction trades, I was pointed to Madeline’s office in the old federal building. There I found her in a small room with one secretary as staff. The Women’s Bureau (established in 1920) has been virtually defunded by recent Republican administrations, but even then funding was shallow.

Long before tradeswomen had an office or a staff, Madeline allowed us to use a conference room in her building for meetings on Saturdays. Fifty women might show up and we’d host a wide-ranging discussion that often focused on sexual harassment (we called it gender harassment then; there were no laws prohibiting it) and isolation on the job. We tackled the issues of race and class, strategizing how to build an organization and a movement.

Madeline talking with Jane Beelby, who made a career as an elevator constructor, 1970s

Speaking to a gathering of tradeswomen, 1970s

Acknowledging her fans at a tradeswomen conference, 1980s

Madeline understood the importance of communicating as a way to to support each other and organize. We had the idea of a newsletter for tradeswomen, something that could connect us and help women find jobs in the trades. We began publishing Trade Trax newsletter out of Madeline’s office. It was a monthly two-page tract that volunteers mimeographed, folded and mailed. We charged $1 to get on our mailing list and a couple hundred women paid their buck.

In 1980, while Jimmy Carter was still president, Madeline called me with the news that some big mucky muck from the Department of Labor was coming to town. She asked me to put together a proposal to fund a newsletter or magazine. We were granted about $5000 and Tradeswomen Magazinewas born. The grant didn’t pay for staff, only printing and mailing, and tradeswomen volunteers wrote it, then typed it into columns and pasted it up one Saturday every three months. We published it for nearly two decades. It was the principal way tradeswomen communicated with each other around the country and the world during the 80s and 90s.

Later, after she retired, Madeline funded, out of her own pocket, the newsletter Pride and a Paycheck, edited by Sue Doro, which is still being published.

In 1979, Madeline, along with Susie Suafai and other advocates, founded the nonprofit organization Tradeswomen Inc., still going today. It was Madeline who first thought of the term tradeswoman.

I know there were many other projects Madeline championed, but she always kept us in her sights. When Tradeswomen Inc. foundered for lack of funding, as often happened, Madeline could always be counted on to slip us enough money to pay our staff person or to help us find grant funding to keep us afloat.

Madeline was an inspiration to us all partly because she never turned her back. In the early 70s she grabbed on to the issue of women in construction and didn’t let it go for half a century. Class tensions arose between tradeswomen and our advocates. We were a fiercely independent tribe and many of us didn’t trust government officials or academics or lawyers, even the ones clearly on our side. Not everyone appreciated the federal government and its representatives. But Madeline hung in there with us.

Our association was long and fruitful. We appreciated Madeline and we honored her frequently. At one event I introduced her as having witnessed more of my relationships and breakups than my own mother had. Madeline never lost her sense of humor. She reminded me that she was much younger than my mother. But, of course, she could have been my mother. We were about 20 years apart in age.

Madeline also roped her husband Joe into helping tradeswomen. He was an experienced grant writer and participated in many long fundraising meetings with us. Joe died in January after a short illness.

Madeline Mixer, never a tradeswoman herself, was arguably the most important brick in the house tradeswomen built. Her legacy of advocacy highlights the importance of collaboration. She never stopped believing in us.

Sisterhood is Powerful. That was my take-home from the 14th Women Building conference. When more than a thousand tradeswomen, supporters, advocates and union brothers convened in Los Angeles May Day weekend, it was by far the largest gathering of female construction workers in the history of our movement. Union tradeswomen of all crafts came together from all over the country and the world to share experiences, strategize, laugh and cry together.

There is nothing like being in a room full of a thousand cheering sisters, and it was a new experience for me, a tradeswoman activist of 40 years. We are a diverse group of women, a rainbow of race, class and ethnicity, all part of the sisterhood. I spoke to many individual women—young members of the California Conservation Corps who drove all the way from Fortuna in Northern California, old timers greeting old friends, students who are working to get jobs in the trades. They all said the best thing about this conference was the camaraderie.

I’ve participated in the Women Building conferences since their beginning in 2002, and many tradeswomen conferences before that. But this conference was qualitatively as well as quantitatively different from past events and I think it portends a new chapter in our Tradeswomen Movement. I think three factors point to a sea change in our movement: first, the sponsorship of the North America’s Building Trades Unions (NABTU); second, the development of mature leadership at local, state and national levels; and third, the advent of social media and its use by the larger community of tradeswomen.

The NABTU sponsorship was the result of work by the National Women’s Committee, especially Patti Devlin, Debra Chaplan, and Caroline Williams. We now have leaders like these on a national level connected to union presidents and internationals as well as the Task Force on Tradeswomen’s Issues, which brings policy expertise to our movement. I was thrilled by the number of women who stood up when asked who had been elected to a leadership position in their unions. And this year the vast majority of women were sent by their unions to the conference.

A new feature this year was the popular tradeswomen action clinic table. Organizers chose two primary issues that we could weigh in on: restoring federal WANTO funding for tradeswomen organizations, and resisting so-called Right-to-Work legislation in the states. The table was organized by elevator constructor LJ Dolin, Kelly Kupcak from Chicago Women in Trades, and Nicole Aro from the AFL-CIO. It was a great idea and organizers plan to expand it next year with more ties to workshops. The number of participants at the tradeswomen history workshop that I gave with historian Brigid O’Farrell showed us that women are interested in our history and in using what we have learned over the years to forge a new strategy for our movement.

When I got home and started friending folks on Facebook I could see that our community already has been successfully organized by Sisters in the Building Trades’ Melina Harris, who gets kudos for bringing so many women into the electronic media fold. I love that we can kvetch and share our stories instantly on groups like Trade Women Chat. It’s a far cry from our days publishing the quarterly Tradeswomen Magazine with writing, typesetting, layout and bulk mailing tasks taken on by volunteers.

What started as a conference for California tradeswomen (sponsored since 2002 by the California State Building and Construction Trades Council) has now become Women Building the Nation. Next year’s conference will take place in Chicago—the first of these outside of California. We’ve got the dates: April 29-May 1, 2016. It’s an opportunity to expand on existing networks of tradeswomen in the Midwest and to make our movement truly national.

Tradeswomen have long been virtually invisible on the front lines of the Feminist and Civil Rights Movements. We still are the ones who daily confront the most aggressive kind of sexism and racism in our traditionally male jobs. For decades now we have been devising strategies to counter isolation and harassment at work and to increase the numbers of women in the trades. The numbers and enthusiasm at this conference give me hope that we can build a better world for women in the trades. I’m looking forward to the 2025 conference: Women Building the Universe.