Rummaging through my mom’s scrapbooks from the 1930s I came across a packet of letters, a rare find. My mother saved minutiae from her life: bridge tallies, restaurant menus, cocktail napkins, greeting cards, dance cards, wedding invitations. But she saved almost no personal letters, although I know she wrote and received troves of them.

The envelopes are all addressed to Miss Florence Wick and marked on the outside: “Via the usual route,” “To be read on Friday,” “To be read on Saturday” and “To be read on Sunday.” Carefully opening the tattered envelopes, I found hand-written notes on stationery from the Neil House Hotel in Columbus, Ohio. They looked to me like love notes—from a woman named Edna L.

Haven’t we had fun with meetings and parties and “baths” and rushin’ ‘round! And what am I going to do without you when you are gone? You will just have to come to New York sometime soon so we can share some other experiences….

Love and a hug—Edna L.

What did she mean “baths”? OMGoddess! I had to call my brother Don immediately.

“Flo had an affair with a woman! I have proof!” I blurted. Perhaps I could have approached the delivery of this information differently, building up to the climax with more suspense. My brother’s lack of excitement revealed my failure.

“You’re making up things again.” He could have added, “just like Dad.” Our father was an accomplished teller of tales, amusing but not to be believed.

My wife Holly was equally suspicious. I hadn’t realized I’d built such a reputation for exaggeration. No one believed me. I just had to revel in my discovery alone. 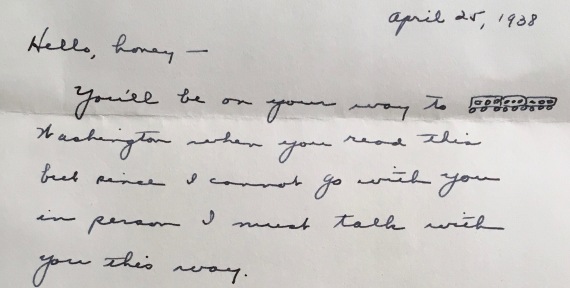 I delved further, looking for more information about Edna L. I read the letters over. Edna sometimes signed her name Eddie or Edie, but she never included her last name. I love that she called herself Eddie, a definite lesbian cue. She illustrated the notes with endearing stick figure drawings. From the letters I learned that Eddie and Flo had roomed together at the national YWCA council meeting in Columbus. Eddie had written the notes during their time together and given them to Flo to be opened each day on the train ride home to Washington State. How romantic!

I read through all the accompanying articles and programs about the national YWCA council meetings that Flo had attended in Chicago and Columbus in 1937 and 1938, but I couldn’t find any mention of Eddie. I looked at every picture in the two scrapbooks. Flo had devoted two pages of one scrapbook to pictures of a woman who had died, kind of a shrine. The pictures show Flo and the friend on a camping trip in the mountains. The woman’s death photo, showing her body lying on a coffin-like bed, is in an envelope pasted in the scrapbook, but there is not a single clue as to who she was. I pulled up the photos to see if there was anything written on the reverse side. Nothing.

The woman in the photos looked rather morose. Could the dead woman be Eddie? Did Eddie kill herself after Flo spurned her advances? Reading the letters, I can see she was clearly smitten, but there’s no indication that Flo felt the same. I let my imagination run wild. My poor mother! She must have felt terrible guilt. No wonder she left no clues about the identity of the dead woman.

My brother seemed slightly more interested in this new theory and he agreed to help me research the dead woman’s identity. We found one clue in a picture that decisively ties the dead woman to Flo’s hometown Biz-Pro group, and from her letters we know that Eddie was from New York, so I had to abandon my romantic story about Eddie. However, I’m holding onto the suicide theory until we can identify the dead woman. I can totally see how my adorable young mother might have inspired unrequited love.

9 thoughts on “My Mother’s Lesbian Affair”