Flo was awakened in the middle of the night by some kind of howling. It sounded like an animal in distress. She was a light sleeper, so she gained consciousness quickly and it didn’t take long to realize the sound was coming from downstairs, inside the house. She threw a robe over her nightgown and rushed down the stairs, her feet brushing the bare floor.

The howling emanated from her parents’ bedroom. There she found Gerda doubled over at the side of the bed keening, holding her husband’s head. Ben’s face was gray but his expression peaceful. He had died in his sleep, painlessly at least, thought Flo. She embraced her mourning mother, hugging her for several minutes as Gerda wailed.

They had known this day would come, but that had not lessened the shock. Ben had been ill with heart trouble for some years and had been recovering from a recent heart attack.

Flo tried to comfort her distraught mother. She would have to take control of the situation. She would grieve later.

Betty and Ruth came out of their rooms at once to find Flo consoling their mother.

“What happened?” they wanted to know, but it was a question born of shock. They knew it was Ben.

“This will ruin my wedding,” wailed Ruth without thinking. Flo glared at Ruth.

Gerda sat on the bed, still sobbing. Her girls surrounded her and offered comfort.

“He said to me this morning that his heart felt hollow,” sobbed Gerda. “If we had taken him to the doctor he might still be with us.”

Flo was closest to Ben of all the daughters. He had set great store by her and made his high expectations clear. Flo had loved him dearly, sharing his appreciation of reading and politics. She was proud of both her immigrant parents for having worked so hard to make a life in a new country. They were exemplary Americans and she had tried to follow their example in her own life. Ben was only 58. What a sad thing that his life had been cut short so young. He had done his very best to support their family during hard times, taking any jobs he could find during WWI and then the Great Depression.

Life on the farm at Meadowview for the girls had been a delight. They were too young to do much work and so they got to play, as long as they stayed away from the train tracks, which ran nearby. Ben and Gerda cut the meadow with a scythe and pitched the grass into piles with pitchforks.

The haystacks had been such fun to play in, but now Flo was keenly aware of the work that had gone into harvesting the hay for their one cow. In her mind she could taste the tart fresh buttermilk that was left after Gerda had made butter and paddled it into the buttermolds. But as a child she was unaware of the effort that went into the making of butter. Gerda had to milk the cow twice a day every day and churn the butter by hand. Then it was stored under the floor through a trap door that Ben had made with a screen-covered frame for foods that needed to be kept cool.

Gerda now had an “Easy” copper washing machine with an electrically operated wringer. She used two tubs for rinsing and bluing. But on the farm she had washed clothes outdoors by hand using a galvanized tub and washboard. Clothes were hung to dry outdoors in the summer and on lines strung across the kitchen in the winter. Flo remembered her mother hunched over her treadle sewing machine making clothes by kerosene lantern, and her father’s rounded back as he worked at keeping the books, squinting to see in the dim light.

Ben had grown delicious strawberries and now Flo was thinking too of the work that went into planting, irrigating, harvesting and marketing. She remembered the brooder house where Ben had incubated the eggs and the pens where rabbits were raised for sale. Ben had taken all the produce and animals to the little town of Junction City five miles away to sell. During the school year he had also worked as teacher and janitor in a one-room schoolhouse nearby teaching all eight grades. The farm had been a losing proposition, but had failed not for a lack of hard work. Their parents had given it their all before they had reluctantly sold it and moved into town where Ben found a teaching job. At heart he had been a teacher and artist, not a farmer. Still, after they moved to Yakima he and Gerda had worked the hop fields in the summers when Ben was not teaching. The family also worked picking brush in Gerda’s sister Ellen’s apple orchard in Selah. Aunt Ellen often “forgot” to pay the girls, but Ben had earned 15 cents an hour, $1.50 at the end of the day, enough to buy some bread and hamburger. 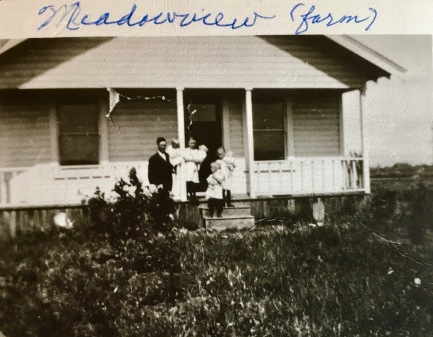 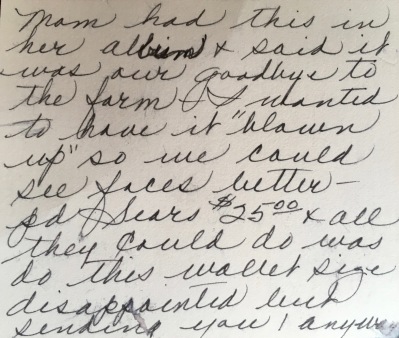 Flo’s note on the back of the photo

He had worked until his heart gave out. After that Gerda and the girls took over. Flo pictured Gerda mowing the lawn, sweating in the sun in her house dress and straw bonnet while Ben lay in the hammock they had put up for him on the front porch, his nitroglycerin nearby in case of an angina attack. Was he ashamed to be seen there by people driving by on 16th Avenue, a man loafing while his wife did the man’s work?

Had Ben regretted fathering five daughters and no son? He had never once indicated that, but friends and family made the assumption. One relative had even put in writing in a letter how tragic it was that there had been no boy. Flo would not allow herself to believe that her father had shared such thinking. Besides, she thought to herself, she had been the best son that Ben could ever have.

The setting full moon shone an eerie light into the kitchen window where Flo led Gerda, sat her down and lit the wood stove to make coffee. The family had prepared for this day and knew they needed to make funeral arrangements quickly in such hot weather. The doctor must be contacted to certify the death. A funeral date must be agreed upon and relatives must be contacted. Ben had two brothers in the US. Erick had gone to the Yukon during the gold rush and still lived there in a one-room cabin. Flo took out a pencil and note pad and began making a list of out-of-town relatives who would have to be sent telegrams. Ben had a small insurance policy and Gerda hoped it would cover the cost of his funeral.

Their father was gone. Life would never be the same in the Wick household.

2 thoughts on “Rich in Tolerance, Generosity and the Spirit of Simple Living”