In my quest to archive the papers stored in my mold-infested storage room, I this week photographed two albums made by my mother in the 1930s. My mother, Florence Wick, graduated from Yakima (WA) High School in 1929 ½ (no explanation as to why there were half-year graduations) at age 16. She had skipped ahead a year. From the dates I found in these albums, it seems she assembled them after graduation. The first date is 1929. The last dates I found are in 1941. 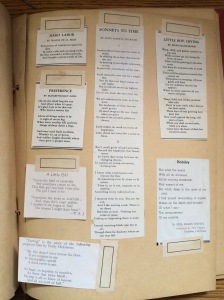 One album is a scrapbook, mostly a collection of poems cut out of magazines and pasted onto the pages. There’s a typed list titled Keep Your Friends Friendly with penciled annotations. A handwritten poem titled Friends is also pasted in. It could be Flo’s writing, but I don’t think it is. There’s a typed “poem” titled I Like, which starts, “I like polka dots. And molasses. And Spanish antiques.” That piece also is annotated with question marks and underlining. It’s followed by a long list of likes that Flo has apparently added in uncharacteristic rather messy writing. It starts: “red ties, Dresden china, first editions,” and ends, “farms, horses and hay.” 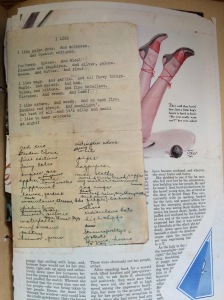 My mother was an avid reader throughout her life. Flo told us about sneaking books into bed and reading through the night with a flashlight under the covers when she was a kid. As a young person, she also wrote poetry and won at least one poetry contest, although none of her own poetry appears in this scrapbook. As an adult she collected volumes of poems that lived on a bookcase in our family’s living room. She must have schooled me in poetry because I remember arguing with a teacher in grade school about how a poem should be read (I knew the poem; the teacher didn’t). But I never appreciated poetry as my mother did. 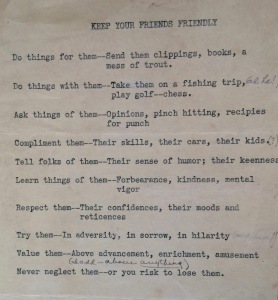 Tucked into the inside cover of this scrapbook is a photo of a young man dressed in knickers smoking a pipe and holding what appears to be a fox kit in what looks like a rather cold, stark place with some houses in the background (I think this is her boyfriend who spent time in the Pribilof Islands, and I remember other pictures of him, but not what he was doing there). The one other picture is cut out from a magazine—a young woman trying to bait a fishing hook. 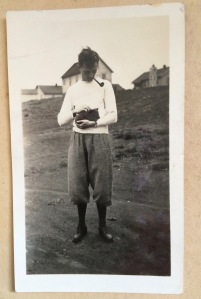 One newspaper clipping tells of her father’s death of a heart attack at the age of 59 in 1938. Other pages cut from magazines contain instructive stories (“If you must run after a man…the really smart girl is the girl who, while joining in the chase, makes it appear as if she weren’t”). I think Flo cut these out not for the stories, but for the poems on the reverse side. If I were a dedicated researcher I’d read and analyze all the poems, but perhaps I’ll save that task for another day.