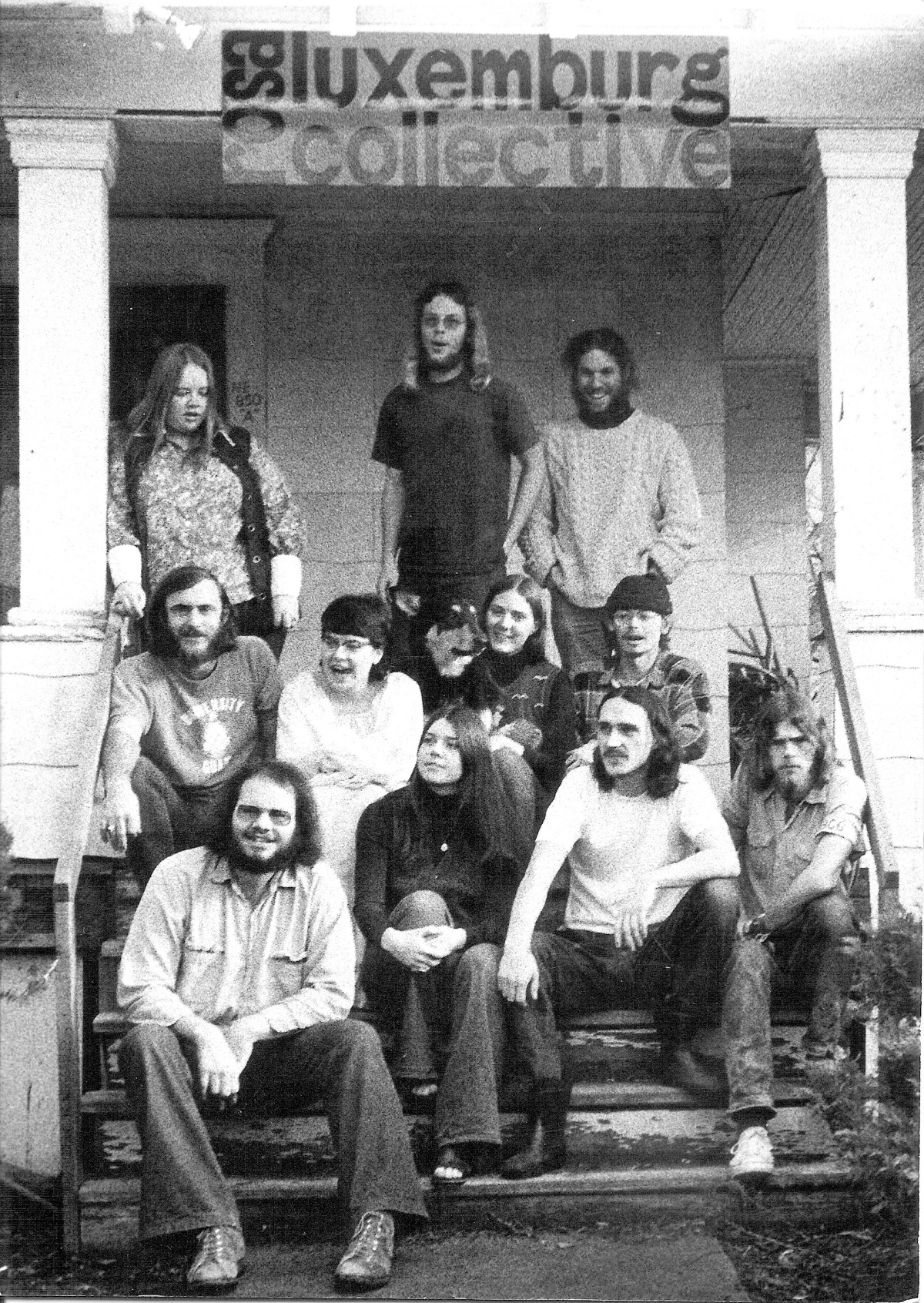 The Rosa Luxemburg Collective was the culmination of our years’ long experiments in collective living arrangements in Pullman, Washington.

Thirteen of us student activists rented an old fraternity house and split all the costs. As members of a hippie commune, we believed in locally grown, organic food. There were no local farmers’ markets so we started a food co-op and began looking into buying food in bulk from large producers. This opened our eyes to the nature of the food distribution system. It turned out that in the Northwest much of the growing and handling of food was controlled by a Mormon empire and the closest warehouses were across the state line in Idaho.

I was the bread maker and wished for whole grain flour made from a kind of wheat they used in Europe. You couldn’t get it then. Bread in the 1970s in the U.S. was mostly of the Wonder variety. Whole grains were just on the verge of popularily. In New York or Chicago you could find a local German bakery, but in our small town if you wanted whole grain bread, you had to bake it yourself.

Bread making requires the baker to be around for two risings, so twice a week on days when I wasn’t in class I’d bake all day. We ordered flour in 25 pound sacks, and stored it in the freezer to discourage bugs, so it was deliciously cold when I would first plunge my hands in. Making bread was my form of meditation. I used the Tassajara Bread Book method, making a spongey mass first so the yeast got a good start before growth-inhibiting oil and salt were added. The first batch of bread would be eaten immediately by lurkers lured to the kitchen by the yeasty smell. I knew to make enough so there would be loaves left for the next couple of days.

The irony was that Pullman is surrounded by wheat fields. One year there was a glut of wheat and the grain silos were completely filled, forcing farmers to leave mountains of the unhulled grain near the train tracks. I imagined jumping into the piles of grain as one would jump into raked leaves, falling in like quicksand. I imagined it stone ground by old-fashioned mills. I imagined it refined and baked into perfect loaves.

The wheat fields surrounding us seemed terribly romantic from afar, driving by them on Highway 2. Winter wheat is planted in the fall and begins to grow before being covered by snow, then peeks up through the melting snow in spring. By the end of the spring semester, tall spikes undulate along the rolling hills. The sight of those softly swaying hills in spring makes you want to run out into nature, strip off your clothes and commune with her. One day my friend Joe and I decided to do just that.

Joe was a fellow student who lived in a collective house farther out in the Palouse country, a century-old uninsulated wood-heated farmhouse, the kind with two storeys and a huge porch. Keeping the interior of that building warm in Palouse winters required the burning of much wood and continual fire stoking. Mostly the human residents were just cold. The fabulousness of spring, when it arrives in this northern climate, cannot be overstated. Spring fever, I believe, is more truly celebrated in places where winter grips with an icy hand.

That April day was a spring cliché. The sun shone warmly and fluffy clouds floated in a clear blue sky. It was the time in spring when various shades of green compete for attention: the delicate yellowish green of early spring leaves just beginning to bud, the dense dark forest green of firs. The wheat fields were a bright emerald green, sort of wizard-of-oz-ish. When I walked out of the farmhouse, I expected to see the yellow brick road shining in front of me.

In the sixties there was a TV ad for something. It involved a couple running toward each other through a wildflower meadow, embracing wildly and–I forget what happens next. I was very taken with the wildflower meadow and tried to reenact this running embrace when I could get a friend to play the other part. Through years of trial and error I found that wildflower meadows, any meadows really, were hard to run through, especially when one is looking up at one’s soon-to-be embracer and not at the ground. Rodent holes, depressions dug by hooves and unseen drainage ditches create truly hazardous conditions. Yet this image persisted in my brain. Meadows equal romance. OK, meadows equal sex. That’s what the TV was saying, right? Today it would be an ad for Cialis.

There was another factor at work here too, besides spring fever and the power of advertising. A subculture that encouraged sex in the outdoors had blossomed in the Palouse and we were part of it–cultural envoys in a way. By god, we took our envoyship seriously, feeling we owed it to the culture to have sex outdoors as much a possible. There was an entire day devoted to the worship of outdoor sex. “Hooray hooray for the eighth of May; it’s outside intercourse day,” had been a fraternity slogan long before I got to WSU. Our idea was to broaden the whole concept. Why focus only on one day a year?

The swaying wheat fields called to us and Joe and I ran through them with abandon, something, it seemed to us, young people were supposed to do. I was a country girl and so knew, as I said, that fields are not always our friends. I knew, too, that terrible chemicals were applied to agricultural lands. DDT, not yet banned, had been sprayed liberally everywhere during my childhood. We were admonished to keep our shoes on in the orchard and not to swim in the canals and creeks where farmers dumped pesticide residues.

All these things I knew but the TV ad image still had a hold on me. Joe and I loped up the hill behind the farmhouse. When we got to the top, we had a speclacular view of the Palouse, Kamiak Butte in the distance. Had we thought to bring a blanket? Possibly, but even with a blanket, the thick stalks of wheat resisted flattening. Up close, the wheat field was far less romantic than it had seemed far away. The cracked earth looked dead, sprouting nothing but wheat. There were no weeds. This worried me. If whatever had been used on this field could kill weeds, what would it do to our butts, or any part of us that touched the earth?

As much as we felt we owed the culture outdoor sex, the outdoors was feeling less and less sexy. We made a flat place to sit down, but then of course, wheat obscured the view. “Let’s get out of here,” one of us said.

I'm a long-time tradeswoman activist, retired electrician and electrical inspector. I live in Santa Rosa, CA. I also share a travel blog with my wife, Holly: travelswithmoho.wordpress.com. View all posts by tradeswomn