It is massive, about the size of a small suitcase, with a dark blue padded leather cover now, 70 years later, quite beat up. It weighs 25 pounds. Throughout our childhoods my brothers and I pulled it out, looked through it, listened to our mother’s war stories. The scrapbook is filled with photographs, newspaper clippings, letters, travel paraphernalia and it tells the story of Mom’s two years as an American Red Cross (ARC) “donut girl” in Europe during World War II. With a crew of three other women she drove a clubmobile, a truck retrofitted with a kitchen, near the front lines, making and serving coffee and donuts to soldiers of the Third Infantry Division in Italy, France, Germany and Austria.

Mom was a scrapbook maker and for that I am now grateful as I try to piece together the events of her life. Perhaps she had the idea for the album even before she sailed to Europe on a hospital ship in May 1944. I do know that the act of putting it together when she returned home after the war in 1946 salved her sadness at the deaths of so many and helped her readjust to life stateside where it seemed compatriots had moved on and no longer thought about the war.

When my mother, Flo, died in 1983 at the age of 70, I claimed the album and it’s been stored in garages and closets ever since, occasionally brought out for perusal by relatives or friends with an interest in World War II. For a time it lived in the mold-infected storage room and so it was infected along with other archives. I’ve exposed each page to sunlight in an effort to reduce the mold and that’s helped, but when I really want to examine the book I don a respirator to avoid breathing in clouds of invisible mold spores.

In trying to understand the World War II era, my ongoing research includes reading about this historical period and the books I know Flo was reading during the 30s and 40s. Her saved scrapbooks from the 1930s give many clues to what she was thinking and reading, setting the stage for the advent of the 1940s and the war. I’ve found useful artifacts in boxes saved by my brother Don and my cousin Gail. Don dug out a box of Flo’s essays and letters-to-the-editor from the 1960s to the 1980s that I had thought were lost. We have precious few of her personal letters, but my cousin recently found two letters written to her mother, Flo’s sister Ruth, from Europe in 1944! Don, the family historian, has helped me track down information about Flo’s clubmobile comrades. They are now all dead, but I’m in touch with one of their daughters, who is providing another perspective on the “donut girls.” I’ve read accounts of their experiences, although I haven’t found one that mirrors Flo’s particular journey. And I’ve read the stories of men who served in the Third Infantry Division, to which Flo’s clubmobile was attached.

I’ve dreamed of traveling to Europe to trace Flo’s route through towns and battlegrounds. Someday I may do that but I’m thankful that now I can take a virtual trip right here on my computer. 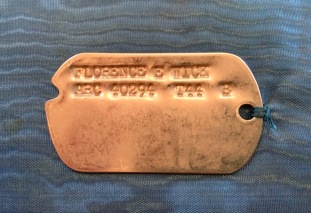 7 thoughts on “The Blue Album”