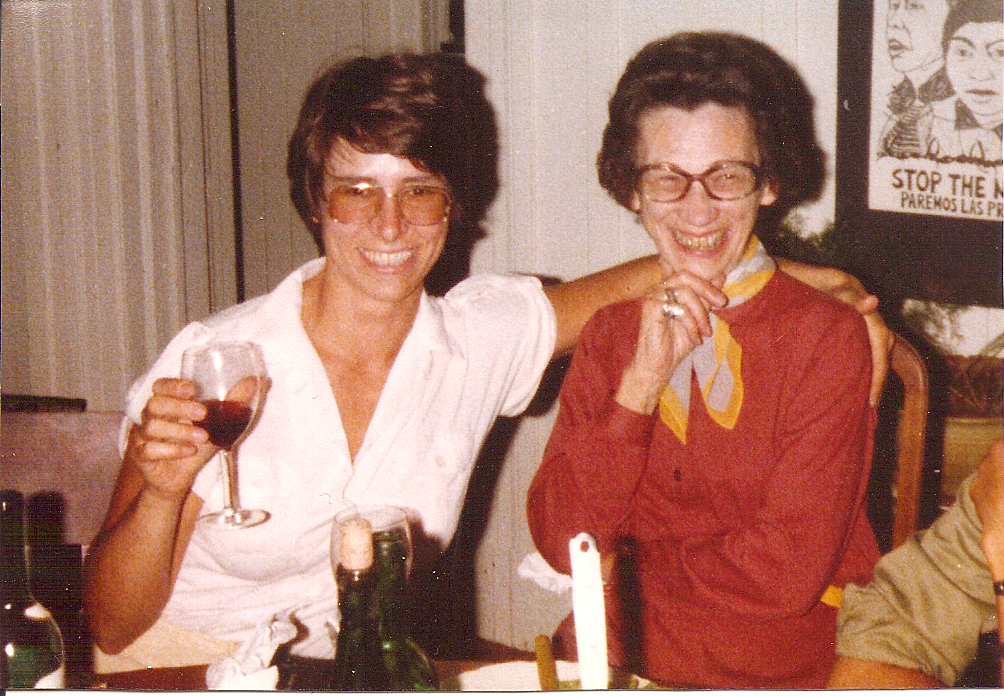 The feminist revolution in Yakima, Washington was not televised but I can testify that we were just as angry and militant as the sisters in New York who got all the press.

In the summer of 1970 I got a job as a reporter at the Yakima Herald-Republic, returning to my hometown to raise money to finance my senior year at college. I’d joined the feminist movement and I’d brought along my mom, Flo. She was already feminist material, a prolific writer of letters to the editor–an activist at heart. A look at my first paycheck radicalized her further. She’d been making a quarter of that all her life as the kind of secretary who actually runs the business while being paid as a typist.

At that time, newspaper reporter was a non-traditional job for women. It was ok for women to write for the women’s section and the food section and to work as secretaries, but reporter was a man’s job. The reporters at the YH-R had been organized into the Newspaper Guild and this was my first union job. I was elated, although I knew the Guild to be a weak union. I felt strongly that the secretaries and office workers ought to have a union too so I started talking up the idea of organizing. That got shut down fast! The office workers made it clear that they felt joining a union would be treasonous. They identified with the owners of the paper, at that time the descendants of its founding family. So, at the outset, this radical feminist succeeded in making enemies of the women workers. But they had been predisposed to dislike me from the beginning, especially one territorial secretary who saw me as a threat and whose put-downs had me hiding in the bathroom crying—the only time in my working career.

In the newsroom, the editor predictably assigned me to the women’s page, where readers turned to discover which of Yakima’s maidens were getting married that week. My job was to type up the wedding descriptions, which involved all of the fussy details like the cut of the bride’s dress and color of the bridesmaids’ frocks. In journalism school and as a student newspaper editor, I’d learned well the craft of editing. In my world, these unimportant details didn’t belong in any story. My wedding paragraphs got shorter and shorter until–busted! Brides’ mothers had begun calling my editor demanding to know why all the important details were missing. It turned out some people thought, and I venture to guess still think, that the color of the bride’s mother’s dress is big news. So my editor returned to writing up weddings and I went on to the news desk.

I did want to write about women, just not weddings. The features editor threw a few human-interest stories my way: a legally blind woman who’d become a pilot, a man who tatted, a dog that could ride on the back of a bike. I pitched a story to the news editor about where women in the Yakima Valley worked. Agriculture, mostly fruit orchards, was still the economic base of the region. My own grandmother had worked the line at a fruit processor and I’d picked apples in high school. I was truly interested in the demographics, but also wanted to investigate where we were not allowed to work. The editor thought it was a pretty good idea, but later reproached me, saying he had not known I was a feminist. How could I possibly write about this subject objectively, he wanted to know? Word sure got around fast.

When I pitched a story about the 50th anniversary of women’s suffrage, they bit. Maybe I could find some real suffragists who’d been part of the struggle to win the vote! Washington women got the vote in 1910, the fifth state to give women the vote, ten years before the 19th amendment became law, so I figured there must have been a suffrage movement. My mother, who’d grown up in Yakima, wasn’t born until 1913. She didn’t know any suffragists, but I got a few leads and started searching nursing homes. I did find women to interview, but they had been mostly too busy raising kids and running farms to pay attention to politics, they said. This I dutifully reported in a feature article. If there had been militant suffragists in the early 1900s in Yakima, I failed to find them.

Yakima is a conservative place, infamous as the hometown of liberal Supreme Court Justice William O. Douglas. When FDR appointed Douglas to the Court, the Yakima paper disowned him. “Not From Here” said the headline. Douglas had been born in Minnesota and raised in Yakima. Ironically, Douglas was nominated to the Court as a representative of the West. But he couldn’t wait to get away from Yakima to seek his fortune. He wrote a book titled Go East Young Man.

Though I was undeniably a Yakima native, like Douglas I couldn’t wait to get away from my hometown. But the prospect of living with my parents, working as a reporter and making trouble just for the summer seemed like fun. A small group of us formed Yakima’s first National Organization for Women chapter, meeting at the home of a woman even older than my mom to document the inequality we experienced. We listed low pay, poor access to jobs and humiliating dress requirements, like having to wear hot pants to work as a waitress. There were restaurants and bars reserved for men only; and all those cultural expectations that we would serve our husbands, bear children and become homemakers. Also, everything we read placed the women’s movement in New York City. We chafed at that version and wanted to show that sisterhood was powerful in little towns in the West too.

In the back seat of a VW bug on the way to the first meeting, the young woman sharing the seat with me whispered that her female lover had left her. Distraught, closeted, and with no community, she was looking for a friend to talk to. She saw in me something I had yet to see: I was a sister dyke. Later, I regretted that my own life experience was too sparse to understand or even to sympathize. I had yet to love and lose. I had yet to come out, even to myself.

While not well schooled in romance, by this time I was an experienced organizer, having planned and executed anti-war and women’s liberation protests at college. I’d learned how to run a campaign, how to get media attention. I’d written and performed in guerrilla theater plays and given speeches, painted protest signs and silk-screened armbands. I’d participated in consciousness-raising and I was ready to act to change my world.

We aimed our first action at a restaurant where businessmen lunched that barred women. We had read about McSorley’s bar in Manhattan, which had denied women entry for 116 years until it was forced to admit us that very summer. A journalist, Lucy Komisar, the first to test the judge’s order, was dowsed in beer by jeering men. Our plan was to just walk in, sit down and demand service. We doubted beer dousing would follow, but who really knew what the reaction would be.

Resisting authority always made me nervous but also thrilled me. Just that spring we students had staged a giant strike and shut down Washington State University over racism. Flo had joined me at student demonstrations against the Vietnam War. My mother had saved me from threatened expulsion for moving off campus by making my case in a letter to the university president. Women’s protests had led to the college aborting in loco parentis rules requiring us to wear dresses and to observe curfew. Old sexist ways were crumbling in our wake, making us feel the power of sisterhood. We were on a roll.

We had cased the restaurant and, as planned, six of us marched in and took a table right under the sign that read “MEN ONLY.” Flustered waiters ran to the manager for advice and we were asked to leave. Would they call the police to arrest us, we wondered. We weren’t doing anything illegal were we? They refused to serve us but we did take up a table during the lunch hour. As it turned out, men didn’t give up their privileges easily, but no dousing followed our restaurant protest and after some resistance we helped the restaurant to see the light. We won! I don’t remember the names, or how many visits it took, but I do remember the determination, the camaraderie and the elation we felt when the restaurant gave up its policy and served us all lunch.

That summer our other protests involved wearing pants to work (handy tip: start with culottes) and pasting stickers that said “This Insults Women” on public signs and ads we deemed sexist (the ubiquity of these messages is hard for us to remember and for the young to imagine now).

Our NOW group chose as its summer coup de gras a rally to celebrate the 50th anniversary of women’s right to vote on August 26, 1970. One day, at my desk at the newspaper, I got a call from the New York Times. They were doing a story about how feminist groups across the country were celebrating Women’s Equality Day. Elated, I eagerly catalogued our victories and detailed our plans for the rally.

In preparation for our celebration, the artist in our group made signs that we posted about town, others secured a sound system and a soapbox. We planned to rally in Franklin Park, near the city center. We arrived dressed in 1920s garb, imagining throngs of women all excited to speak out about their oppression publicly, but the hoped-for crowd didn’t materialize as it had on the college campus. We gave a few short speeches, and then made the microphone available for other women to speak. No one stepped onto the soapbox except young boys experimenting with guttural sounds. Among the lessons we learned: maintain control of your mic and know your audience.

I couldn’t wait to see how my phone interview with the New York Times had come out. I rushed to the library to check out the paper and found the story–not in the women’s section. Our rally may not have been televised, but our little group of Yakima activists made the Times!

Epilogue: We went on to change our world.