Mary Jo Estep was the last surviving Indian of the last Indian massacre in 1911. She was one of four children who survived the massacre. The other three died the following year of tuberculosis. Mary was about 18 months old when a posse in the Nevada hinterlands ambushed her mother and the remnants of her tribe and shot them while they were asleep. Her grandfather, Shoshone Mike (he was actually Bannock and his wife Jennie was Ute), had led the band across 300 miles of western desert after refusing to go to the reservation.

Raised by the family of the white superintendent of the Fort Hall Indian Reservation, Mary knew little of this and did not remember it. When, in the 1970s, the Oregon writer Dayton O. Hyde wrote a book about her grandfather and the massacre, he found her and told her the story. Her reaction to the attention this brought was to discount it. “Most of my friends are non-Indians. I was raised in the white world.” “They know my mother was one of Shoshone Mike’s daughters. Her name was Snake and one thing I can’t stand is snakes,” she joked. About her grandfather she said: “I knew he had something to do with stealing things, but I never asked. I’m just not a curious person, I guess.” About the massacre she said: “I never think about it. I’ve got too many other things to think about.”

Mary Jo Estep graduated from Central Washington College with a degree in music and spent 40 years teaching school before retiring in 1974. At the age of 82 in 1992, Mary died in a nursing home because a nurse had given her the wrong medication and hospital staff determined that her non-resuscitate directive meant that they could not help her. The effects of the overdose could have been easily reversed. She took several hours to die and in that time her friends, who had come to pick her up for a party, surrounded her, but could not move the doctors to save her life. 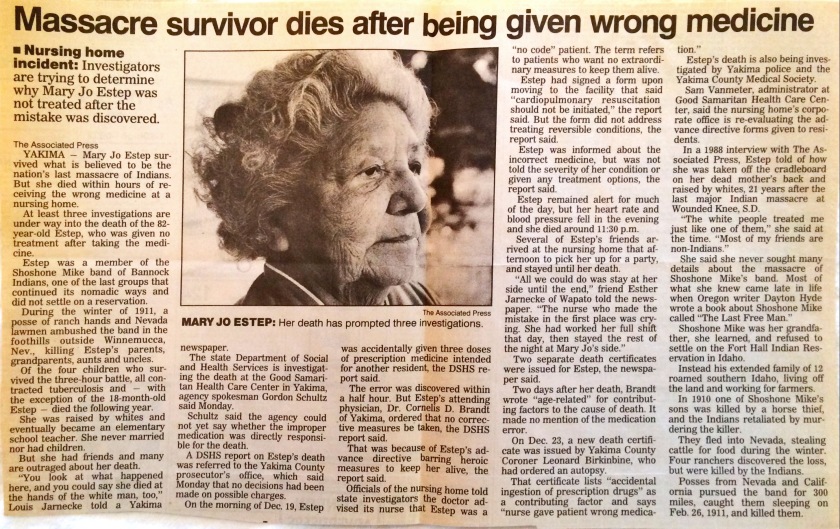 “You look at what happened to her, and you could say that she died at the hands of the white man too,” said Louis Jarnecke, one of her friends.

I still have the newspaper article telling of her death, and the book written about her grandfather, The Last Free Man. What they don’t say is that Mary Jo Estep was a lesbian. She lived with her “long-time companion” Ruth Sweany for more than 50 years on Summitview Avenue in my hometown, Yakima, Washington.

I met Mary Jo and Ruth through my mother who had organized a seniors writing group in Yakima. My mom was interested in the history of our part of the world and she encouraged old people to tell and write their stories. She worked for the senior center there and for a time she produced a local TV program in which she interviewed old-timers and taped their histories. The women told me they were part of a group called “Living Historians,” and laughed saying, “At least we’re still living!”

I have a chapbook that includes the writing of all three: Mary Jo, Ruth and my mother Florence Martin. My brother Don and his press, Hard Rain Printing Collective, printed it in 1980. Mary’s only piece in the chapbook, The Man With the Hoe, chronicles an incident from her childhood of an old man who is lost and then found the next day by neighbors. Two of the published entries are by my mother. Ruth Sweany has four; three are poems, but the fourth is a prose piece that describes her life with Mary, particularly when their friend Mabel comes to visit on Fridays. I think the friend must be Mabel George, another writer published in the chapbook.

A photo in the archive Yakima Memory from the Yakima Herald-Republic newspaper shows Mabel George (born January 8, 1899) at the piano, and another entry is titled Mabel George Children’s Songs from 78 records, 1947. So Mabel was a musician and songwriter.

Ruth’s story never mentions Mary, but clearly the “we” in the piece refers to Ruth and Mary as a couple. It’s about the fun they have when their friend Mable visits. They listen to music (a critique of modern loud disco music follows), they read poetry and plays to each other. They also write and produce plays, calling themselves “The Carload Players.” Ruth writes that they even produced a couple of plays before an audience. This makes me wonder if their papers were archived and whether I might find the scripts, but I’m not hopeful.

These women rejoiced in each other’s company. Ruth writes: “So our Fridays are always cheerful. Why not? We are doing things we enjoy, in a congenial group. After one of Mabel’s visits the world stops going to the dogs and the sunshine comes out a little brighter.”

Ruth and Mary carved out their own woman-centered culture in the hostile environment of Eastern Washington before the advent of the modern women’s movement and lesbian pride. Living lightly on the cultural landscape served them well.