Address to the University of Washington Labor Archives gathering May 12, 2018

Tradeswomen sisters, friends and advocates! Today we celebrate the victory of our movement to integrate the construction trades. Women have achieved parity. Sexual harassment and sex discrimination are things of the past.

The truth is that after nearly a half century of organizing, our movement has failed to achieve parity or even a critical mass of women in the construction trades. But we have made some amazing gains. I want to talk about that and I want to pose a question to you all.

Let me give a little background and then we’ll hear from the distinguished activists on our panel and in the audience. Thanks to Conor Casey and the UW Labor Archives we have a panel of veteran tradeswomen foremothers. These crones are woke!

Here’s my backstory. I grew up in Yakima, went to college at Washington State University in Pullman and then moved to Seattle (the big city) in 1974.

I know many of you are as old as I am and were here in the 1970s. For those who were not, let me try to paint a picture of the times. Does anyone remember the admonition “Will the last person to leave Seattle turn out the lights?” That was in 1971. Remember the recession? Boing, the main employer in town, had laid off thousands of workers and the city was in a funk.

I was a young person in my 20s just trying to survive. With a degree in journalism, I worked as a temporary office worker, as a parking lot attendant, as a community organizer in the VISTA program, as a reporter at The Facts newspaper, all the while looking for a job or a better job. When I couldn’t get hired as a cocktail waitress, I was offered a “job” as a topless dancer working for tips.

We lived collectively, partly to save money but also because we believed in collective living. Those big mansions on Capitol Hill made great collective houses. We struggled to pay for groceries and heat. But at least rent was much less expensive than it is now.

Tradeswoman historian Vivian Price wrote about this period: “Seattle was a magnet city in the 1960’s and 1970’s, attracting people who were interested in social change to move there…Seattle was on the cutting edge of social movements. It was a city known for being a center for the women’s movement, with a thriving lesbian and gay culture, a strong old and New Left, and a vibrant movement among communities of color. Activists from each of these movements crossed paths and in some cases supported one another’s efforts. In some cases, support became collaboration, to each other’s mutual advantages.”

The city was a cauldron of dissent. Left and communist organizations flourished. The Vietnam War continued. Angry discontented citizens demonstrated in the streets. Many people felt the only solution to our foreign policy crisis was to overthrow the state. Bombings were frequent.

The 1963 Equal Pay Act and the 1964 Civil Rights Act gave us new employment rights, but they had not yet extended to the construction trades. We formed an organization, Seattle Women in Trades. We were just rabble—unemployed women who wanted good paying jobs. From the beginning we had two powerful adversaries—the contractors and the unions.

Our struggle was for affirmative action. We demanded access to jobs that had been denied to us. We saw ourselves as part of the feminist movement and also the civil rights movement.

In Seattle we collaborated with several other organizations:

Even at that time Seattle was miles ahead of other cities in regard to affirmative action. And this is the question I pondered for decades and I hope you will help me answer: Why was Seattle so far ahead? Let me pose some possible answers.

I say we failed to achieve critical mass, but let’s look at some of what we accomplished on a national scale.

I was one of the founders of Seattle Women in Trades. When we first started we were just a bunch of women who wanted decent work. Why did we want jobs in construction? Money. Trades jobs paid three or four times what “women’s jobs” paid, enough to support a family. Also we wanted an escape from confining office work. We wanted an escape from pumps and pantyhose. We wanted to build something. We wanted to break down the barriers.

In the 1970s we were lucky to have CETA, a federal job-training program. In Seattle we had Seattle Opportunities Industrialization Center, which had classes in electrical wiring, plumbing, carpentry. That six-month program was my destination. But women first had to reckon with sexism. I was asked if I could type and when I replied yes (the last time I admitted that), they told me I was not eligible for the electrical training program because I already had skills that would just go to waste. Fast-talking and possibly a threat got me in and that training was the basis for my career as an electrician.

My goal was to get into the electricians union, the International Brotherhood of Electrical Workers. But when I applied, I was rejected. They said I was too old. I was 26. That’s when I decided to move to San Francisco.

I arrived in San Francisco in the fall of 1976. There it was the same story. We founded organizations for women in blue-collar nontraditional work, but most of us were still wannabes. We still didn’t have jobs and the construction unions’ doors were still closed to us, though they were feeling pressure to integrate. I started a contracting business with a partner, and then joined Wonder Woman Electric, an all-female contracting company. Later, in 1980, I was able to join the union only because San Francisco was experiencing a construction boom and they needed skilled workers.

In 1976, with the help of several feminist law firms including Equal Rights Advocates and Employment Law Center in San Francisco, women sued the USDOL for discrimination. This lawsuit resulted in goals and timetables for women in construction trades, 6.9 percent at the beginning. Seattle was used as a model in the 1978 federal regulations. Of the eleven women who signed on to the lawsuit, three were from Seattle Women in Trades: Diane Jones, Mary Lou Sumberg and Beverly Sims. The others were from San Francisco, Washington DC, Fairbanks Alaska and Walla Walla WA.

When tradeswomen heard about the federal regulations, signed into law 40 years ago on May 8, 1978, we celebrated! We did the math and figured it would only be a few years until we achieved critical mass in the trades. We thought if we could just get to ten percent, we would be less isolated and might be able to change the male culture of the construction site. If Jimmy Carter had stayed in the White House we might have made it, but in 1980 Reagan was elected and he immediately began dismantling affirmative action programs. We still had the laws, but no enforcement.

The right wing successfully challenged our old organizing strategies. In the 90s and aughts in California and Washington anti-affirmative action ballot measures essentially made affirmative action illegal. We could no longer do targeted enforcement in these states. Affirmative action, the most important tool we had to fight employment discrimination, was effectively dead. Class action lawsuits had been an effective tactic in the 70s, but new restrictions have put an end to that.

Here’s my short answer to the question: Why was Seattle so far ahead?

We have some distinguished activists from the Tradeswomen Movement here today, women who have spent their lives in service to our cause. I’d like to introduce Connie Ashbrook, the founder and ED (retired) of Oregon Women in Trades and Nettie Doakes of Seattle City Light. Now let’s hear from the tradeswomen panelists: Plumber Paula Lukaszek, Ironworker Randy Loomans, and Plumber Zan Scommodau.

To cap off my trip to Seattle, I visited some of my old haunts with a friend from back in the day. I was surprised to see the Comet Tavern still there on the edge of Capitol Hill. So much else has changed in Seattle. When I told the bartender I’d danced on the bar the night Nixon resigned, August 9, 1974, he said, “This beer’s on the house.”

To watch the video of this event: http://www.seattlechannel.org/videos?videoid=x91548

A bunch of tradeswomen activists organized Washington Women in Trades in 1978 and its been sponsoring the Women in Trades Career Fair annually ever since. This was its 39th year and I was delighted to be in Seattle last weekend to see the biggest women’s trades fair ever.

A man came up to me and said proudly, “That’s my daughter on the poster.” 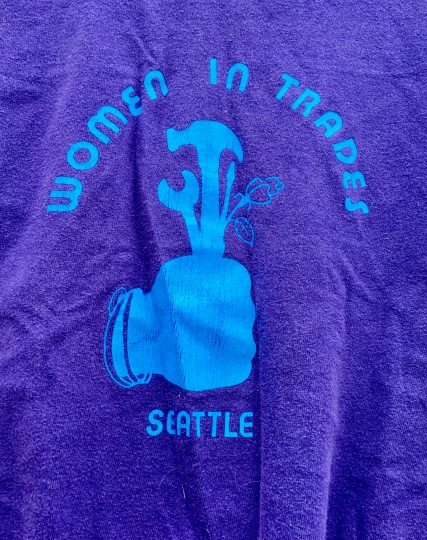 The first T-shirt made by Seattle Women in Trades, 1974

She’s giving them a pep talk. You can do it!

I met up with Connie Ashbrook, the recently retired director of Oregon Tradeswomen Inc., one of the most successful recruitment and training organizations in the country. She introduced me to some of the Northwest tradeswomen movers and shakers. 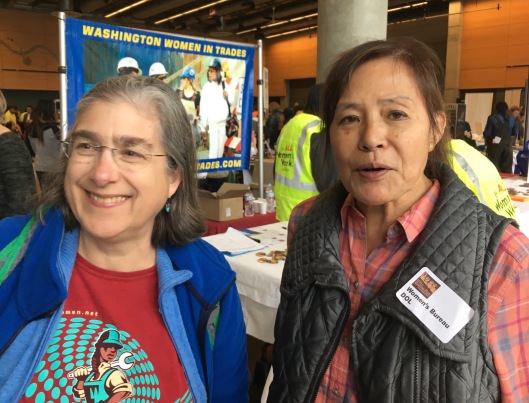 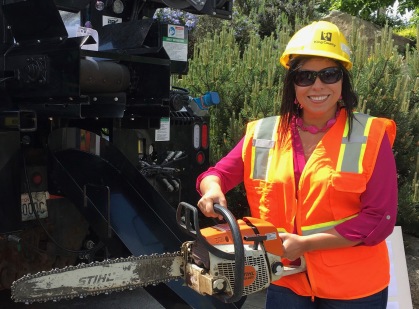 My favorite part was the demonstrations. You could fire up the chain saw. You could don climber’s gear and the women of Seattle City Light would teach you how to climb a pole. Sit up in the cab of a big truck. Try walking on stilts with the painters. The welders showed me how to use the plasma cutter. 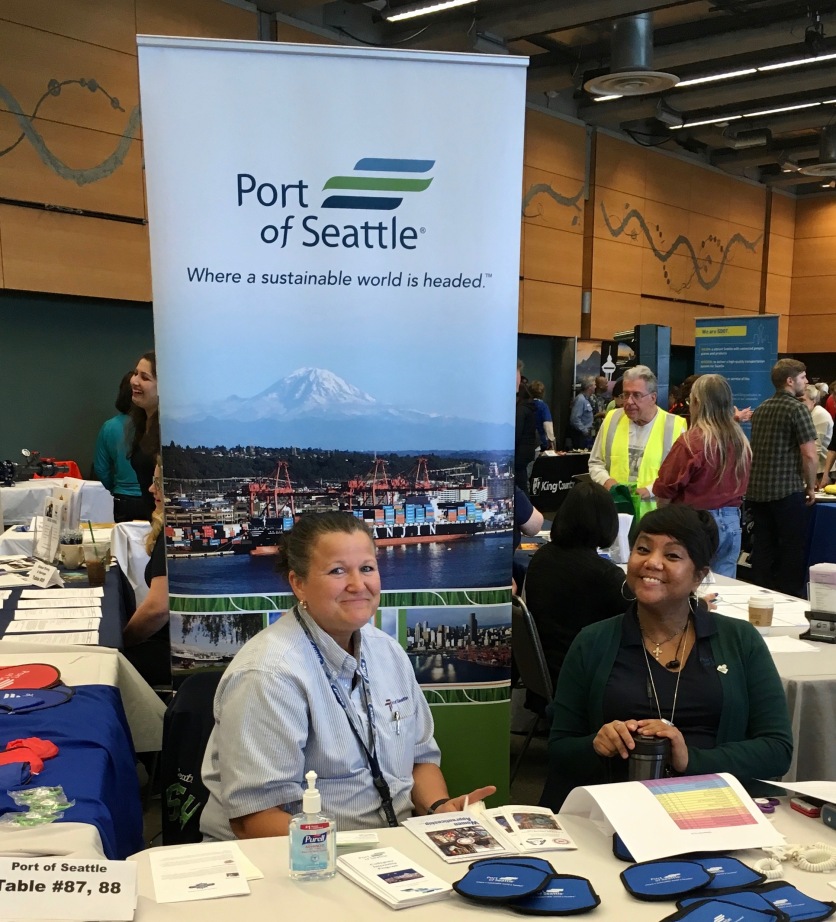 The show was at Seattle Center, home of the space needle, so Connie and I had to go up. I had a vision of drinking a fancy beer while taking in the 360 degree view of the city and the sound. But the space needle was a construction site in the middle of a major renovation! That meant we got to watch the glaziers installing thick glass windows. Cool. And there was a woman on the crew! 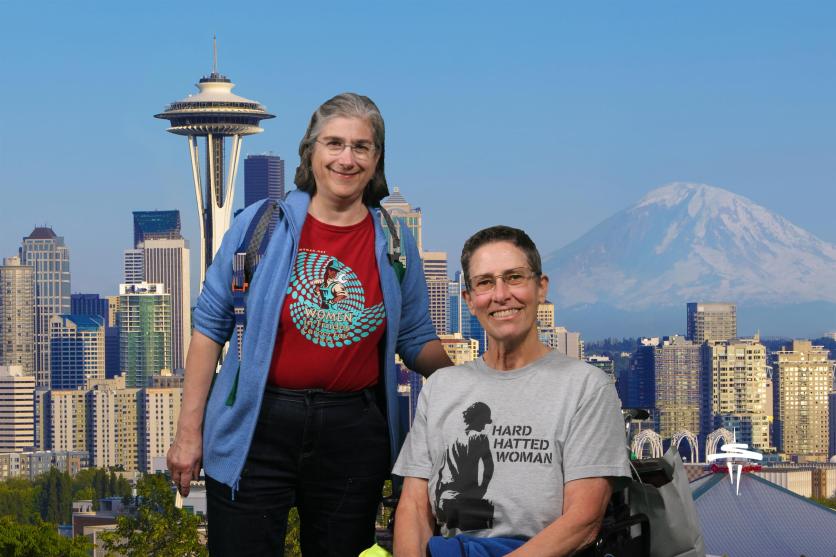